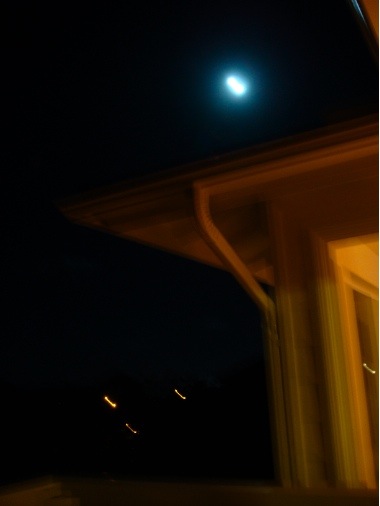 Julie called in through the window tonight while I was making myself dinner and asked me if I wanted to go see the full moon. I was in my pajamas and had settled in for the night so I wasn’t really apt to go. But I said yes because I like her and thought it would be nice to get to know her better. I’m so glad that I went. Three different people, prior to this, had told me that I had to check out the full moon. I didn’t really understand. Now I do.

It was getting dark as we got to the beach and the moon was growing brighter and brighter. We walked the entire length of the beach glancing up at the moon every now and again. It was more beautiful than any picture or painting of Lanikai I’ve ever seen. The moon was hanging low between the Mokes and the sky was charged with deep blues, purples, and pink. The beach was so quiet but there were pockets of neighbors talking with each other, some of them letting their dogs run and play in the sand.

Julie said that full moon nights remind her of the air in the South of France. I don’t know about that because I’ve never been but it certainly felt like being in a completely different place, country… even planet.