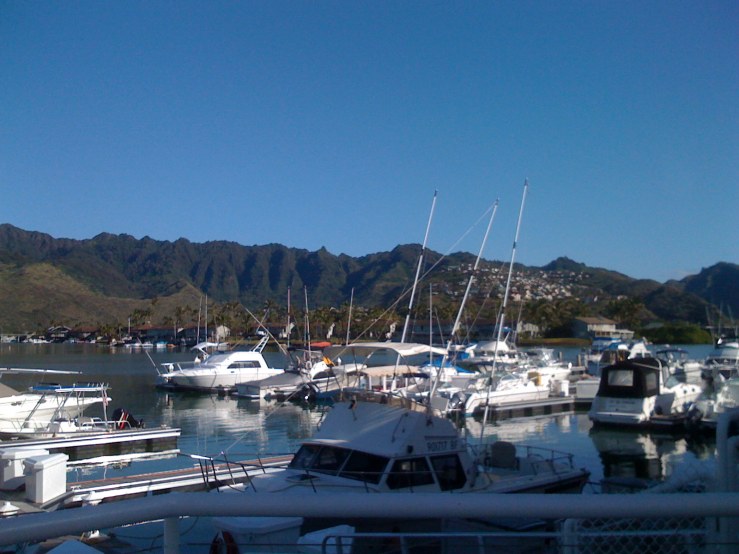 I dragged myself to Bikram yoga in Hawaii Kai this morning (with K’s help).  I’m so glad because it was the best Bikram class I’ve taken so far, better even than many of the non-Bikram classes I’ve taken.  The key is the teacher Manny.  He’s very tough but for all the good and right reason.

The class is at Koko Marina Shopping Center and it’s the only studio on the island that uses infrared heat.  I was resistant to going because it’s thirty minutes away and lately I’ve had to summon up a lot of energy to travel just five minutes to the Kailua Studio because sometimes it can feel like a chore.  The Kailua studio is the only Bikram place I’ve ever been to prior to this.  So, in fairness,  my realm of comparison is limited.

To preface what I have to say next I should explain that people sweat buckets when doing Bikram yoga.  It’s the reason people do it.  There’s a standard classroom design for Bikram studios which includes carpeting.  Buckets of sweat, wet carpet, humidity, heat…it’s a recipe for some stinkiness.  With that said,  the basic difference between the two Bikram studios is that Kailua’s  smells like a big foot (as I’ve heard most Bikram places do) and Manny’s studio is clean, peaceful, beautiful and it smells nice–like semi-sweet crayons.  Kailua isn’t awful.  The environment is supportive and I really like class with Kathryn.  I think maybe Manny’s class was just really great.

I figured today since I was going to a new class in a new town with a new teacher, I would use my new stuff including my barely used yoga mat bag:

I’ve been too embarrassed to actually bring this bag into classrooms because it’s kind of fancy.  So I’ve been leaving it in the trunk of our car.  Today I brought it in with me and it was fine, no one’s eyebrows went up.

Manny started out by talking to four of us that were new to the class in the lobby.  He is very insistent about how you behave in his studio.  He didn’t want us holding any of our stuff while he spoke to us.  And even if you’d done Bikram before he wanted to go over breathing, stance, and doing the asanas with grace.  After a couple of minutes he let us in and class started shortly after.

Like I said, he runs a tight ship.  One of the other new girls kept making little indignant noises every time Manny would say something like  ‘your job is to keep the floor around you dry…etc etc….I don’t care what happens in other studios, this is how it is in this studio’.  I just giggled because I’d heard and read online that Manny, to some people, seems very eccentric but I found him charming.  Another great line:  “please no chatting, it’s not that i don’t care what you have to say, it’s that others don’t”  That made my stomach clench because it was so funny.  The thing is, as I’ve said, his studio is so well kept that it’s a pleasure to be there.  Also, Manny keeps such tight control of the class that it makes you feel like you can relax and just worry about yourself.  It’s very liberating.

Pretty much every Bikram teacher I’ve had before him keeps up this relentless prattle through the 26 poses.  I understand that it’s part  of the style or method of keeping you in the moment but most times it just makes me anxious and distracted.  Manny speaks in a low gentle voice and he shares information (which is why I also like Kathryn at Kailua).  My favorite thing he said today was that Bikram Yoga helps you sleep–not because you end up so physically tired but because it helps you learn to quiet the monkey in the tree.